Thatcham Wado Karate Club was founded in 1993 by Sensei Paul Knight, who ran the club for almost 20 years. 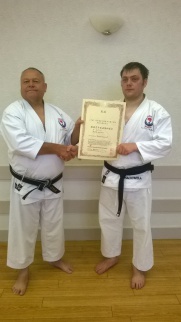 Stuart took his first Karate lesson in November 1993 as one of Sensei Knight's students at the Thatcham club. He trained regularly as a junior at both the Thatcham club and a number of other clubs within the association, advancing through the grades and competing in tournaments.

A motorcycle accident in his late teens led to a halt in his Karate training, and it was 10 years before Stuart returned to the Dojo in 2010 to resume his training. Training once again in Thatcham with Sensei Knight (until his own departure from the club in 2012) and then with Chief Instructor Sensei Barry Wilkinson (8th Dan).

Stuart began to act as Sempai at the Thatcham Club in 2012 as a purple belt, developing his teaching skills over several years before taking his black belt (1st Dan) grading in 2016 and taking over as Sensei of the Thatcham club.

The founder of England Wado Kai, Barry Wilkinson, has an impressive pedigree,starting Wado-Kai Karate in February 1968 and training all his Karate life in only Wado-Kai Karate being a member of The United Kingdom Karate-Do Federation later changed to UKKW, Barry being taught Wado karate by many of the leading exponents of the style by Master Toru Arakawa 9th Dan plus Sensei Tatsuo Suzuki 8th Dan, Sensei Katsumi Kobyashi & Sensei Tadayuki Maeda plus many more prominent Wado-Kai Senior Sensei's achieving Sandan (3rd dan) by grading in 1977 one of the first British Sandan (3rd Dans) of the UKKW.

All new beginners welcome to try out a lesson for free